Hi there! Today I’m sharing a review for a fantastic contemporary M/M romance from Garret Leigh. WHAT REMAINS is a bittersweet story of loss and recovery–and it kept me up all night. There’s also a link to the tour-wide giveaway below. 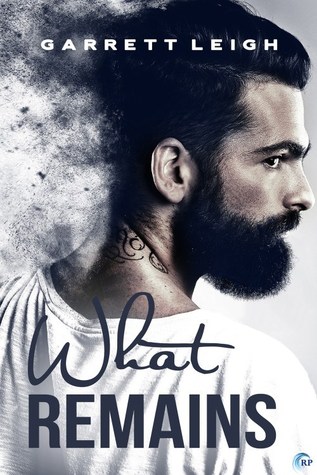 About the book:
Web designer Jodi Peters is a solitary creature. Lunch twice a week with his ex-girlfriend-turned-BFF and the occasional messy venture to a dodgy gay bar is all the company he needs, right?

Then one night he stumbles across newly divorced firefighter Rupert O’Neil. Rupert is lost and lonely, but just about the sweetest bloke Jodi has ever known. Add in the heady current between them, and Jodi can’t help falling hard in love. He offers Rupert a home within the walls of his cosy Tottenham flat—a sanctuary to nurture their own brand of family—and for four blissful years, life is never sweeter.

Until a cruel twist of fate snatches it all away. A moment of distraction leaves Jodi fighting for a life he can’t remember and shatters Rupert’s heart. Jodi doesn’t know him—or want to. With little left of the man he adores, Rupert must cling to what remains of his shaky faith and pray that Jodi can learn to love him again.

My Review:
Jodi is a solitary bisexual man, living in Tottingham, London. He’s a web designer and doesn’t go out much but one Boxing Day he meets Rupert, a fireman who’s also a bouncer at a club near his home. Rupert’s concerned about Jodi’s state–he’s a bit high–and walks him home. They share coffee and conversation. Rupert awkwardly confesses that he’s gay–newly out and never been with a man–and they share a kiss. It’s electric. But, it’s also too soon for more. Rupert wants to call Jodi, waits a few weeks, and they meet again. It’s all so new and frightening, but Jodi makes it seem so cool, that Rupert falls hard. So does Jodi. They move in within months and Jodi’s just as smitten with Rupert’s young daughter as he is with his sexy fireman.

Nearly five years pass in this idyllic domestic bliss. Then one day, Jodi’s hit by a vehicle while crossing the street, and he’s in a coma. When he wakes, months later, he doesn’t recognize Rupert. Worse yet, Jodi doesn’t remember any of their time together, and wants his ex-girlfriend, Sophie, back. He thinks.

This one was a true emotional roller coaster. I’ve read a few injury/amnesia books and they are always so compelling. The medical advice is often to “wait and see” what memories the patient will recover on his or her own–without too much prompting. It’s a frightening experience to be unable to recall what one did yesterday, a week ago, but to lose years of memories, relationships, experiences is often debilitating. When Jodi wakes up and doesn’t know Rupert, he freaks out–dead scared of the stranger in his hospital room. The physicians agree that Rupert should be patient, be a steady support, but not tell him all about their history. Rupert’s shattered, yet he agrees to assume a position as Jodi’s “flatmate” because he can’t bear to walk away from the man he loves. Also, he’s afraid telling Jodi will cause Jodi to reject him outright, and he’d rather be his friend than have no contact.

So, this is a hurt/comfort story in the extreme. I liked the flashbacks which allowed me to watch Rupert and Jodi fall in love the first time. There is so much tenderness! Most of the book takes place after the accident, and Jodi’s recovery is a mess, not just mentally. He’s got physical problems, and terrible headaches, and is mostly unable to care for himself for months. Rupert’s job as a fireman takes him away for long hours, and Jodi’s ex, Sophie spends lots of time as his carer. Jodi can’t understand why they didn’t work out, and he’s confused by his unwanted attraction to Rupert. Rupert’s daughter, who’s looked at Jodi as a step-father for years now, is being kept away–because Rupert can’t explain why Jodi doesn’t know her. That said, meeting her in an unexpected way brings Jodi back to his earlier self. He starts to recognize that Rupert isn’t his friend–that they had shared a life together, and he mourns his missing memories all the more.

I felt that the medical issues Jodi faced were realistic. Many of the symptoms and effects could hold for brain injury sufferers or those with dementia, to some degree. That helplessness and fury were so potent, while Jodi himself felt impotent. Little by little life realigns, however, and Jodi isn’t willing to accept a half-life any longer. Memories may be gone forever, but new ones can be made, and he wants these to be bigger and better than those he’d lost–and also, with Rupert by his side. So, expect a lot of hurt, a lot of comfort, some sweet lovin’ and some sassy quips on the way to an HEA. I seriously read this book in one sleep-deprived night, unable to set it down.

Interested? You can find WHAT REMAINS on Goodreads, Riptide Books, Amazon, Barnes & Noble, and AllRomance. I received a review copy of this book via NetGalley.

Comment (with your contact info) on any of the tour posts (alas, not mine, just thought I’d share!!) for WHAT REMAINS to enter to win $25 in credit at Riptide Publishing. Entries close at midnight, Eastern time, on July 9, 2016. Contest is NOT restricted to U.S. entries.
Good luck and keep reading my friends!

About the Author:
Garrett Leigh is a British writer and book designer, currently working for Dreamspinner Press, Loose Id, Riptide Publishing, and Black Jazz Press. Her protagonists will always always be tortured, crippled, broken, and deeply flawed. Throw in a tale of enduring true love, some stubbly facial hair, and a bunch of tattoos, and you’ve got yourself a Garrett special.

When not writing, Garrett can generally be found procrastinating on Twitter, cooking up a storm, or sitting on her behind doing as little as possible. That, and dreaming up new ways to torture her characters. Garrett believes in happy endings; she just likes to make her boys work for it.

Garrett also works as a freelance cover artist for various publishing houses and independent authors under the pseudonym G.D. Leigh. For cover art info, please visit blackjazzpress.com. Otherwise you can find her on her website, twitter or Facebook.