Hi there! Today I’m excited to share a release day blast for a YA thriller with romance elements from bestselling author Pintip Dunn. MALICE sounds like a fast-paced read that I’m excited to check out. 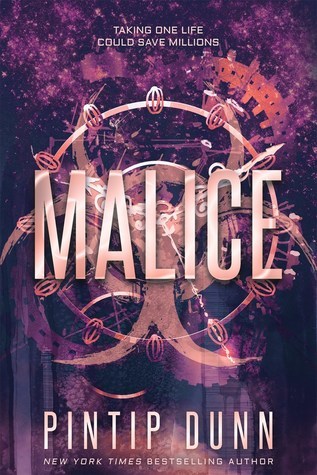 About the book:
What I know: a boy at my school will one day wipe out two-thirds of the population with a virus.
What I don’t know: who he is.

In a race against the clock, I not only have to figure out his identity, but I’ll have to outwit a voice from the future telling me to kill him. Because I’m starting to realize no one is telling the truth. But how can I play chess with someone who already knows the outcome of my every move? Someone so filled with malice she’s lost all hope in humanity? Well, I’ll just have to find a way―because now she’s drawn a target on the only boy I’ve ever loved…

Before I know it, I’m a foot away from the basketball court. The players are taking a break, and Bandit stands at the edge of the concrete, taking long pulls from a water bottle. Up close, his brilliant hair looks almost purple, and his T-shirt sticks to his back in sweaty patches, hinting at his solid muscles.

Now what? Do I clear my throat? Tap his shoulder? Going for broke, I do both at the same time.

He turns and lifts his eyebrows, as though wondering how a mere mortal such as myself dares to approach him. He’s tall—really tall. Almost a head above my five feet five. His jaw is chiseled, his shoulders broad. I’m so close that I can feel the heat rising off his body.

My brain scrambles. I forgot to check if I had any food in my teeth! Did I brush my hair this morning? Put on clothes?

Okay, so clearly I’m not naked, but for the life of me, I can’t remember what I’m wearing. Please don’t let it be the navy T-shirt with the faded splotches on the shoulder, from when I accidentally added bleach instead of detergent to the laundry.

I glance down. Jeans and a white tank top—my favorite shirt because it has Lin-Manuel Miranda’s autograph. More than passable.

“I, uh…” My entire vocabulary chooses that moment to flee.

His lids lower, and he looks at me, decidedly bored. “Yes? Can I help you?”

Three, four, five of his basketball friends angle their towering bodies toward us, probably wondering what the interruption is about.

Sweat gathers at the nape of my neck, and electricity hums along my skin. The Voice is about to zap me again. I just know it.

I wheel around, ready to sprint, when a hand snags my arm. His hand.

“Wait a minute,” Bandit says, his eyes 2 percent less bored. “Are we in third grade? Do you want to give me a note asking if I love you back, so I can circle yes or no?”

My cheeks burn hotter than the sun assaulting my skin. Hotter, even, than the flames that got me into this mess.

I could really use that alien abduction right about now.

The object of my supposed affection smirks. “We can skip the note. Can’t say I blame you for falling for me. I mean, I’m a lovable guy. But have we actually met?” He lowers his voice. “Outside of your wildest dreams, that is.”

My Review:
Alice and her brother Archie are a junior and a senior, respectively, at a prestigious gifted high school. Their mother walked out several years ago and Archie and their father are both certified geniuses, not like Alice. She’s smart, but pragmatic–her talents lay in graphic arts like photography. Their dad runs a pharmaceutical research lab, and spend very little time with Alice and Archie’s a bit of a loner–having trouble making friends is one of his issues. Alice “mothers” him the best she can, and loves him dearly, but he’s a bit on the depressed side, and often the butt of pranks from his peers.

Alice is at school one day when she’s assailed by a painful voice in her head. It’s her own voice, speaking to her from the near-future warning her that there will be a deadly virus unleashed in the next decade that decimates the population. She must stop the Make of the virus, not, before that person can develop enough research to lead to this disaster. In the future, Alice goes by the nickname of “Malice” and it seems she’s closely connected to several students from her school that she’d never befriended before: ultra-popular Bandit, super-smart Cristela, Archie’s bestie Zeke, and she’s got an odd connection to the school bully and her brother’s personal tormentor Lee. Any of these people seem likely candidates to grow into the Maker of the virus. Adding more trouble for Alice, and she tries to unravel the identity of the Maker, her absentee father reconnects with his old college lab partner, Charlie, a sketchy scientist with a grudge who meets nearly all of the likely candidates at a banquet where Archie and Cristela are being honored.

The pacing of this story is really tight, with plenty of tension surrounding the Voice, and the intentions of Malice. Though Alice suspects it, she doesn’t learn until much later that other actors are talking to their “past” selves, in the way Malice informs her, and their agenda is not always to stop the Maker. It’s a deep game and Alice doesn’t know who to trust, but she’s really banking on Bandit, as he seems to be the most trustworthy. Also, she knows through Malice that Bandit plays a really big role in her future-life. There are lots of spins and twists, with Alice trying to build bridges between herself, her tiny family, Bandit and Cristela. Her natural protectiveness at points fosters and harms Archie, but her resolution to find a way to stop the Maker without killing leads to a new possible future, and one she hopes includes Bandit.

I enjoyed the story, and it’s many turns. I’ll admit I was dubious about her odd family from the start, but I was glad to have a plausible explanation for what seemed an avoidable dysfunction. Archie’s bullying situation was deeply troubling, and I know it was intended so, but the lack of action bothered me, especially as Alice often had a front-row seat to his plight. In all, Alice, the not-so-bright-as-her-genius-peers ends up saving the day with good old-fashioned love. I’m not sure if that’s a commentary on the sociopathic nature of intellectuals, on the ingenuity of the common person, or a moralistic stance on the heart being more intuitive than the brain. Her banter with Bandit was amusing, and I got how his brashly antagonistic flirting was more endearing than off-putting. It’s a fun and interesting start to what could possibly be the love of her life.

Pintip’s novel FORGET TOMORROW won the 2016 RWA RITA® for Best First Book, and SEIZE TODAY won the 2018 RITA for Best Young Adult Romance. In addition, her books have been translated into four languages, and they have been nominated for the following awards: the Grand Prix de l’Imaginaire; the Japanese Sakura Medal; the MASL Truman Award; the Tome Society It list; the Romantic Times Reviewers’ Choice Award; and a Kirkus Reviews Best Indie Book of the Year. Her other novels include REMEMBER YESTERDAY, THE DARKEST LIE, GIRL ON THE VERGE, STAR-CROSSED, and MALICE.