Hi there!Today I’m sharing my review for a recently published transgender New Adult romance from Mia Kerick. ALL BOY is a coming of age and coming out story for a transgender teen living life on his terms. I have enjoyed many books by this author, including LOVE SPELL, THE WEEKEND BUCKET LIST, and THE ART OF HERO WORSHIP. 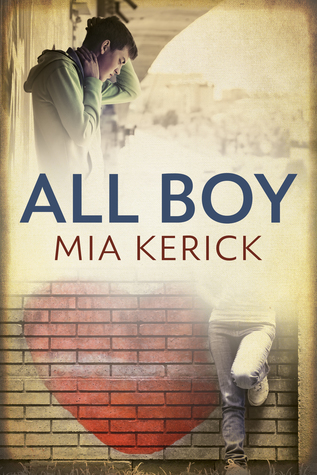 About the book:
Seventeen-year-old Callie Canter knows all about screwing up—and being screwed over. After her so-called boyfriend publicly humiliated her senior year, taking a fifth year of high school at Beaufort Hills Academy is her second chance to leave behind a painful past. But her need for social acceptance follows, and going along with the in-crowd is the difference between survival and becoming a target. Staying off the radar is top priority. So, falling for an outsider is the last thing on Callie’s “to-do” list. Too bad her heart didn’t get the memo.

With his strict, religious upbringing and former identity far away in Florida, Jayden Morrissey can finally be true to himself at Beaufort Hills Academy. But life as a trans man means keeping secrets, and keeping secrets means not getting too close to anyone. If he can just get through his fifth year unnoticed, maybe a future living as the person he was born to be is possible. Yet love is love, and when you fall hard enough, intentions crumble, plans detour, and secrets are revealed.

From multi-award-winning author Mia Kerick, comes a powerful, timely, and life-changing novel, which follows two teenagers nursing broken hearts and seeking acceptance, and who together realize running away isn’t always the answer.

My Review:
Callie Canter is at an exclusive prep school trying to finish her his school diploma now that she’s in a healthy place. In her hometown she’d been a victim of partner abuse, with a controlling, demeaning boyfriend whose constant criticism led to body issues, and whose release of a nude video completely humiliated Callie. She’s not sure about this new school, but she’s determined to use her therapy-gained emotional management skills to get past the crap she otherwise would have folded under. She’s got a great new roomie, and her soccer skills have garnered the attention of the kind of guys she’d usually dated: built jocks with more quips than thoughts. Except, those are the types of guys she’d been abused by in the past.

Instead, she’s really drawn to Jayden Morrisey. He’s thin and lithe, and funny and so smart! Why does Jayden live off campus and work, though? It’s peculiar, and intriguing. Jayden’s always standing up for Callie, and she likes that he’s not aggressively sexual, that they have a connection that is intellectual and emotional rather than only physical. Naturally, this makes Jayden a target for the suitors Callie’s attracted. He’s not big enough to stand up against the bullies, and the more he antagonizes them the more the threats ramp up.

Jayden has a big secret, it’s his first time living on his own, in his own skin–transitioning in dress and manner into the man he’s always been on the inside. He’s attracted to Callie, but he has a lot going on, not least of which is his hyper-conservative family who can’t understand why he didn’t accept the full-ride softball scholarship at a Christian college. This first taste as living authentically is an amazing experience, and Jayden considers coming out to Callie. But the guys chasing Callie aren’t willing to let her go–and make moves to “unmask” Jayden before he can discuss it with Callie.

I liked how authentic the relationship between Callie and Jayden felt, as well as the fast friendship she has with her roomie. Jayden’s got a hot mess to unravel, and he thinks it’s best if he does it off campus. While not ideal, Jayden heads home, and it’s up to Callie to make amends. That raises other issues that Callie must manage for herself, namely her dependence on others to define her self-image. Throughout the story, Callie’s insecurities in herself dictate her actions and inactions. That’s right, Callie’s lack of action cause Jayden great harm, and she has to mount a road-trip to help Jayden get justice. I liked how it turned out, even if I was disappointed by Callie for a large chunk of the book. The resolution is a heart-warming experience, with Jayden and Callie finding the refuge they needed to make their way into the world in healthy and positive ways.

Interested? You can find ALL BOY on Goodreads, Amazon, and Barnes & Noble.