Hi there! Today I’m sharing a review for a newly published dragon-shifter romance from Donna Grant. DRAGON BURN is a novella in her Dark Kings series, (Book 11.5!) and really best enjoyed when read in order. I’ve liked SMOKE AND FIRE, FIRESTORM, and BLAZE, so I’m eager to reach the “climax” of this sexy series. 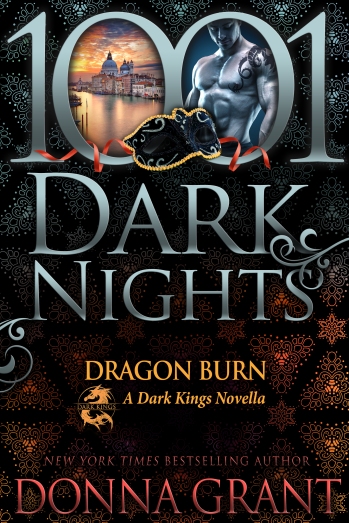 About the book:
Marked by passion
A promise made eons ago sends Sebastian to Italy on the hunt to find an enemy. His quarry proves difficult to locate, but there is someone who can point him in the right direction – a woman as frigid as the north. Using every seductive skill he’s acquired over his immortal life, his seduction begins. Until he discovers that the passion he stirs within her makes him burn for more…

Gianna Santini has one love in her life – work. A disastrous failed marriage was evidence enough to realize she was better off on her own. That is until a handsome Scot strolled into her life and literally swept her off her feet. She is unprepared for the blazing passion between them or the truth he exposes. But as her world begins to unravel, she realizes the only one she can depend on is the very one destroying everything – a Dragon King.

In this scorching Dark Kings novella, New York Times bestselling author Donna Grant brings together a determined Dragon King used to getting what he wants and an Ice Queen who thaws for no one.

She turned her head to look at him. He met her gaze, his clear eyes holding some kind of emotion she couldn’t quite name, but through it she saw the fires of desire as if he were lit from the inside with them.

It caused her stomach to flutter in excitement and her feet to stop working. She stumbled, which caused his arm to wrap around her waist as he drew to a stop and hauled her against him. They stared silently into each other’s eyes as the crowds parted and walked around them. The steady thumping of his heartbeat could be felt beneath her palms.

What was it about Sebastian that made her forget herself? She was a different person with him, one that not only enjoyed his touch—but craved it.

The problem was, she liked how she felt around him. She enjoyed how he made her feel, and how she wanted to feel. The desire, the need, the hunger. She reached for it, accepted it.

She didn’t know how long they stood there lost in each other’s eyes. For a brief moment, she wondered if it was one-sided. Could Sebastian feel the same as her? Did she dare allow herself to follow wherever this road led, no matter how many doorways she walked through?

No matter if she found herself walking alone?

She was standing on the edge of a precipice while he stood on nothing but air, holding out his hand and urging her to jump. Never one to take such a chance, she found herself wanting to do just that.

Even if it meant that she could hit the ground so hard she might never get up again.

It was strange to even consider any of this. Yet here she was. There should be more fear, more concern. Perhaps it was the desire overshadowing those other emotions.

Her cell phone vibrated in her purse, causing her to jump and shattering whatever had held them enthralled. She couldn’t help but wonder if destiny was trying to tell her something. It was the second time they’d been interrupted that day when she’d felt sure he was going to kiss her.

My Review:
Sebastian is a Dragon King who promised to help Ulrik no matter what centuries ago, and he regrets having to bind Ulrik’s magic to prevent the destruction of humanity centuries ago. He doesn’t believe that Ulrik is the menace behind the troubles facing the Dragon Kings of Dreagan. So, he’s off to Venice to investigate a lead in the search for Ulrik. It seems there’s a man who looks quite a lot like Ulrik operating there under the name of Oscar Cox, and Seb believes him to be Ulrik’s disgruntled uncle Mikkel in disguise. Seb positions himself to meet Cox’s beautiful American assistant, Gianna Santini, in order to gain access to her boss and discover his true identity.

Gianna is done with relationships. Divorced and bitter, she eschews meeting men and prefers to be solitary–filling her time with her work for “Oscar Cox,” a powerful British man to whom she’s an assistant. She loves Mr. Cox’s power and how quickly she’s risen within his company. Still, the man seated beside her for the past two nights at her favorite tavern is quite attractive. And, when she strikes up the nerve to chat with him, Seb’s brogue is tasty, too.

They begin a tentative acquaintance, and Gianna is intrigued by Seb’s sensuality and chivalry. Both are drawn to the other, and this is odd for many reasons; Gianna’s not interested in having alover after her disastrous marriage and Seb’s sworn to not take a human lover. Still, they have an easy-going day sharing breakfast and sightseeing. Gianna, wanting to experience more of the thrill of Seb, invites him to the masquerade ball she’s arranged–hosted by Oscar–and that’s when things get hinky.

Seb’s as attracted to Gianna as he’s ever been to any being. And, he’s conflicted about setting himself in her path, because she’s clearly in trouble. At the ball Seb’s suspicions are confirms, and Gianna’s boos recognizes that another Dragon King has been in contact with her. Expect capture, torture and potential casualties. Okay, definite casualties of you count Dark Fae henchmen in the body count. Seb’s connection to Gianna and Constatntine, King of the Dragon Kings, enables him to find out the truth behind Ulrik’s betrayal and Mikkel’s role in their millenia-old feud. Seb also meets the powerful Druid who’s been summoned to destroy both Ulrik and Constantine.

There’s still plenty of plotlines to weave together; this novella is a rather self-contained romance for Seb and Gianna, though it adds some critical pieces to the mix…if only Seb and Gianna could remember what those were. Dang Druids and their memory stealing charms. If my count is correct, partnering Seb with Gianna means that only Constantine and Ulrik are single Dragon Kings–and I expect they will find mates and settle scores in the final book, which I’d expect to come out in the coming months.

Interested? You can find DRAGON BURN on Goodreads and Amazon.