Hi there! Today I’m really excited to share a review for a new alternate universe M/M romance from Kim Fielding. You already know I enjoyed A SECOND HARVEST and LOVE CAN’T CONQUER, but STAGED is something altogether different. It’s a new episode in the Belonging ‘Verse series offered by Riptide Publishing, and it’s a really unique story setting. All the stories take place in a world very much like ours, except slavery was never outlawed… 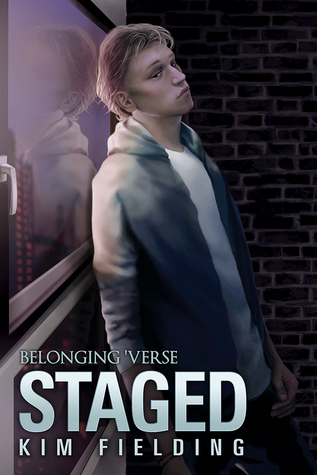 About the book:
Once the second-prize winner on My Slave’s Got Talent, Sky Blue has spent the past few years singing at a failing New York nightclub. While Sky has never had control over his fate, his life seems to take a turn for the worse when he’s torn from the familiar comfort of performing and sold to a rich and enigmatic man.

Morgan Wallace takes his newly purchased slave to San Francisco, his intentions unclear. On the one hand, he treats Sky with more kindness than Sky has ever known—treats him like a real person. On the other hand, he shares Sky at parties hosted by his sadistic new friends.

A confused slave is an endangered slave, and Sky isn’t even sure of his master’s real name. Is he Morgan Wallace, wealthy and cruel, or Mackenzie Webster, caring and compassionate? Caught between hope, fear, and an undeniably growing attachment, Sky struggles to untangle which parts are real and which are merely a performance. His future, his heart, and even his life may depend on it.

My Review:
This book is the third set in the “Belonging ‘Verse” series that explores an alternate world where slavery was never abolished, and is set in current times. It is a stand alone read.

The book has these warnings: dubious consent, explicit violence, and non-consent. You need to understand that this is a fictional slave society. Slaves are not allowed to refuse any task or action desired by any master, even ones not their own. This book contains rapes and horrific beatings of slaves, including the MC, Sky Blue.

Sky Blue is a slave, born from a slave in a whorehouse, though his father was a well-known freeman singer. He was sold at age 8 to a music producer. He later took second in a slave singing competition, and toured the world with the all-slave band 2Nyte. These days he sings in a rundown club, and he knows his days are numbered there. He’s not surprised when he’s sold to a slave trader, and he’s fretful, awaiting purchase in a filthy warehouse where he’s caged all day and night. Then he’s bought.

Morgan seems genuinely apologetic and torn regarding his employment of Sky at these parties. He seemingly takes no pleasure in it, and spends days tending Sky’s wounds in the aftermath. He buys Sky all sorts of gifts, and it’s utterly confusing to Sky. Why? Why torture? Why make amends? Can none of these people see him as human? The answer to that is: NO. Sky challenges Morgan’s beliefs regarding the intellect of slaves, but Morgan’s in a position where he can’t stop his association with the horrible cretins, and manumission (freeing of a slave) is not allowable–unlawful–in any case. That said, he has a genuine affection for Sky. Sky’s also perversely attracted to Morgan–and often takes the upper hand in their private, intimate activities. Sky’s never had a home, only a place to stay where he was communally housed with other slaves. The apartment that he and Morgan share is the first place that feels uniquely home to him.

I don’t want to give away the big twist, but I will acknowledge that I expected it. Morgan’s activity is too shady, and his remorse too sincere. He’s clearly playing a dangerous game with Sky and his new BDSM associates, and he’s unable to pull out, even if it means hurting Sky more and more. Still, Morgan recognizes that Sky is as much a man as he is, and just as intelligent, debunking the indoctrinated fiction that slaves are somehow lesser beings, and unable to feel any sense of their position. This makes Morgan realize that his actions are all the more heinous.

I loved how Sky was so in touch with his humanity, and the limitations and injustice of his station. While there is absolutely a thriller/horrifying aspect to the book, the ending is truly tender and spectacular. Sky never imagined what his fate might be, but he made actual decisions–generally forbidden–that directed the course of his new life and happiness. When he had the opportunities to escape, he demonstrated, without any shadow of doubt, his humanity and commitment to Morgan. It was really so sweet, and I was happily rewarded by bearing witness to Sky’s HEA.

Writing a book from a slave’s perspective is never easy, I imagine. This whole alternate universe is a statement about control, and the lack of it. It allows deep investigation of the darker side of humanity, perspectives that linger malevolently on the side of our current experience, but have never really faded: entitlement, prejudice, absolute power, exploitation, and the like. It’s not a pretty picture–and surely exists on the fringe of society today. By internalizing these stories, readers are able to gain a new empathy for those who don’t have any real power over their destiny or livelihood. I enjoyed the previous two books in this series for that same reason. That said, none of the books are upbeat or happy, though they do end with an HEA, as well. There are no actual repercussions for owners who abuse their slaves, while there are many torments to which a slave can be subject, not the least of which is being sold off to work in dangerous mines. There is a small movement to abolish slavery, but it is still in its infancy.

You are warned in the blurbs–non-consent, violence and dark themes within. Let the reader be wary.

Interested? You can find STAGED on Goodreads, Riptide Publishing, Amazon, Barnes & Noble, and AllRomance. I received a review copy of this book via NetGalley.

Kim Fielding is the bestselling, award-winning author of numerous m/m romance novels, novellas, and short stories. Like Kim herself, her work is eclectic, spanning genres such as contemporary, fantasy, paranormal, and historical. Her stories are set in alternate worlds, in 15th century Bosnia, in modern-day Oregon. Her heroes are hipster architect werewolves, housekeepers, maimed giants, and conflicted graduate students. They’re usually flawed, they often encounter terrible obstacles, but they always find love.

After having migrated back and forth across the western two-thirds of the United States, Kim calls the boring part of California home. She lives there with her husband, her two daughters, and her day job as a university professor, but escapes as often as possible via car, train, plane, or boat. This may explain why her characters often seem to be in transit as well. She dreams of traveling and writing full-time.