Hi there! Getting the word out on a new book in the M/M, menage/poly sci-fi Sarrans series from A.C. Katt. THE SARRAN SENATOR looks to be an intense read.

Catch an excerpt and enter the giveaway for a four-book Sarrans set below. 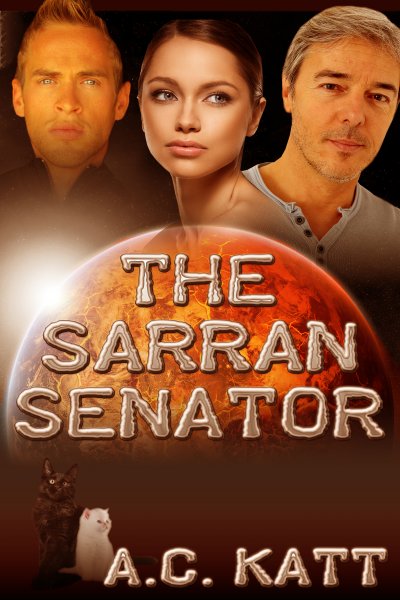 About the book:
The Sarrans return home from Earth in triumph, having gained many new Earthen fems, coffee, chocolate, and cats.

Senator Samuel Johnson joins his grandson Michael, his daughter Sara, and her WarriorPair on Sarran. To his delighted surprise, he bonds irrevocably with Tarin, one of Sarran’s top engineers. Tarin had been bonded before and thought he would never experience a bond again, yet Sam’s love gives him a new lease on life. Now they only hope the Goddess has a fem for them.

Then the Sarran Elders host a mixer for Sarran warriors to meet the Earthen fems. Margaret Mary O’Neil, Meg to her friends, is a talented woman who fled to Sarran like so many Earth women looking for a new life. When she meets Sam and Tarin, her life changes forever.

But while things are looking up for the Sarrans, with new babies being born and WarriorPairs settling down, their enemy the Zyptz are relentless in their efforts to wipe them out. When the Zyptz attack both Sarran and Earth, the mutual dependence between the two becomes ever more evident.

::We will need to get our promise rings and Asta glasses, but we can decide where to live and get our rings and glasses later. Right now I want you under me.:: Tarin pushed Sam’s shoulders down into the softness of the couch pillows. Sam turned on his side so they faced each other.

::I foolishly didn’t bother to ask, although I should have consulted Mark, but now that I’ve taken the vial, does my equipment work the same way?::

::Yes and no. Externally you will see the slick that pours from under your foreskin. This enables one of us to penetrate the other and our fem without pain when we bond. Internally, there will be a type of a tube, a Secondary Sperm Valve that connects your channel to the seminal vesicle in your partner. When a Sarran Warrior receives sperm from his bonded, it opens the valve. The sperm goes through the valve to connect to the seminal vesicle where they mix with the sperm of your bonded. It is only when they mix that we can impregnate our fem. Our offspring are born with half of our fem’s DNA and one-quarter of each of ours. After we form the bond with our fem, we may make penetrative love with her or without her, as the Triad chooses.::

::I feel foolish asking for such basic information. I had the whole voyage to research this aspect of Sarran physiology. I was concentrating on helping Michael adjust to Sara’s Warriors.::

::You did the right thing, my fox. From the holos you showed me, Michael had reason to be wary.::

::Now I feel like a pre-pubescent offspring in health class, not knowing how my body is supposed to function.:: Sam blushed. ::How do I please you?::

::All the ways you’d please yourself without penetration. Let me show you.:: Tarin sat up, got off the couch, and knelt in front of Sam, removing the boots Mark and Juraens had fabricated for him on board the Brightstar. Tarin kissed the inside of Sam’s knee. Sam moaned. He never knew he had a hot spot there.

Tarin removed his own boots and then attacked Sam’s flightsuit. The one-piece garment came off quickly, giving Tarin access to Sam’s body.

Sam looked at his lover in appreciation. “You have a beautiful, hard form. I love your wavy blonde hair and blue eyes. You are everything I ever looked for in a man. If I had met you before Mary, I doubt I would have joined the army. I’d have become a college professor and lived in a house very much like this with you always at my side.”

Sam ran his palm down Tarin’s side from his shoulder to the curve of his ass. “Beautiful … I can’t believe how lucky I am and it seems even our dreams are in alignment.”

Tarin blushed. ::I keep in shape because any Sarran Warrior can be called to battle at any time. You were in governance, how did you train? You have a hard and well-made body, my fox.::

::In the Senate Gym. I exercised and had a trainer. If I were going to be the President, I had to be in the best shape I’d ever been in my life. The job is debilitating. Although the United States is only one country on Earth, the President of the United States carries the weight of the world on his shoulders because we act as the planet’s police and are the only major power left on Earth. Russia and China have the land mass and China has population, but the United States still has the upper hand in weaponry. We, like the Sarrans, also have fierce Warriors.::

::Being on council is much the same as you describe the presidency. The Elders aged quickly during the war and later when the Zyptz took our fems, the Elders bore the brunt of finding a solution. Our population is dangerously low, a mere twenty-thousand WarriorPairs. If you add the unbonded Warriors and offspring, it is another ten thousand. We need all of these bebes our fems are carrying and we must keep them safe.::

::You have too much open land to police properly. What you need is a type of radar that lets the government know immediately if the atmosphere has been breached, or better still, something that shields the planet from all but our own vessels.::

“I’ve been working on that project with Bron. It’s almost ready.”

Sam was about to speak and Tarin put a finger on his lips. ::My fox, I want to know everything about you. We could talk until dawntine but right now, I want to love you. We’re naked and wanting. Can we make love?::

Sam smiled and kissed his bonded’s eyes. “I was counting on it.”

Interested? You can find THE SARRAN SENATOR on Amazon and JMS Books.

Click on this Rafflecopter giveaway link for your chance to win the four-book Sarrans series set from author AC Katt.

About the Author:
AC Katt was born in New York City’s Greenwich Village. She remembers sitting at the fountain in Washington Square Park listening to folk music while they passed the hat. At nine, her parents dragged her to New Jersey where she grew up, married and raised four children and became a voracious reader of romantic fiction. At one time she owned over two thousand novels, until she and her husband took themselves and the cat to New Mexico for their health and its great beauty.

Now, most of AC’s books are electronic (although she still keeps six bookcases of hardcovers), so she never has to give away another book. AC is a late bloomer, however, she claims to have found her niche writing LGBT romance.

She hangs out at ACKatt.com and ackattsjournal.com; where she keeps her blog. To get snippets of new releases and Works in Progress subscribe to AC Katt’s Kattery by sending an e-mail to mlhansel@gmail.com.