Hi there! Today I’m sharing a review for a futuristic M/M sci-fi romance from Astrid Amara. SONG OF THE NAVIGATOR is part Dune, part Star Trek, and an enemies-to-lovers romance. I found it engaging and would love to read a sequel. 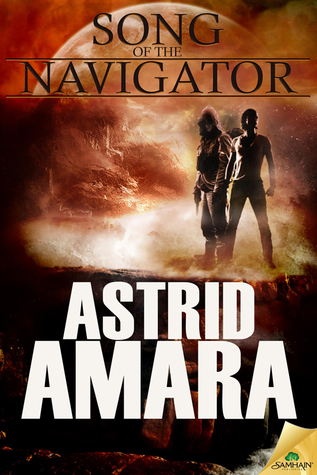 Worst Possible Birthday: Being sold into slavery by none other than your lover.

Tover Duke’s rare ability to move anything instantly across light-years of space makes him a powerful, valuable asset to the Harmony Corporation, and a rock star among the people of the colonies. His life is luxurious. Safe. Routine.

He has his pick of casual hookups passing through Dadelus-Kaku Station. His one brush with danger of any kind—the only bright spot in his otherwise boring life—is Cruz Arcadio, a dark-haired, hard-bodied engineer whose physical prowess hints he’s something much more.

When a terrorist abducts Tover, hurling him into a world of torture, exploitation and betrayal, it’s with shattering disbelief that he realizes his kidnapper is none other than Cruz. As Tover struggles to find the courage to escape his bondage, he begins to understand the only way to free his body, his mind—and his heart—is to trust the one man who showed him that everything about his once-perfect life was a lie.

Warning: This story contains descriptions of extreme violence and assault. It also contains graphic sexual depictions. It also has a lot of birds. And pirate movies from the future. And romance.

Tover Duke is one of 42 navigators in the galaxy. He is esteemed by all for his ability to shift cargo and people, using his voice and some sophisticated technology and body implants, and is well paid for his service to the Harmony Corporation. He loves his beautiful hotel suite home, and his aviary stocked with tame birds, but he doesn’t love how he has to sneak around to find men for his pleasure. Harmony Corp doesn’t approve of same-sex relationships, and Tover has had to hide behind trysts with women. He has one special man he routinely seeks out–Cruz, an engineer who occasionally pops into the space station where Tover lives and works, but those reunions are few and far between.

On Tover’s 30th birthday there’s a huge celebration–and it’s interrupted by the advent of a disheveled Cruz popping in and taking Tover hostage. Cruz convinces Tover to “jump” them both to a remote space station. As soon as they arrive, Tover is taken into custody, and traded to pirates aboard the station to secure the release of Cruz and his associates. (It seemed clear that this was the best of a lot of bad options for Cruz, and one he agreed to reluctantly.) While imprisoned on the pirates’ vessel, Tover is beaten and tortured for his unwillingness to assist moving the pirates’ cargo.

He’s rescued later, but the damage has been done. His torture has resulted in psychological damage that causes him physical and visceral pain whenever he even considers “jumping.” That doesn’t bode well for Tover’s illustrious career in transport. While recuperating in a locale that’s surrounded by enemies, Tover begins to see that his early life was not a roasy as it seemed, and his work for Harmony not as straight-forward. Cruz is back, and his true colors are shown in a way that earns Tover’s grudging acceptance.

I loved how this story worked. It had excellent elements of futuristic life, and technological elements that thrilled my inner-geek. The love story between Tover and Cruz is rocky, but took it’s natural course toward an eventual and appropriately delayed HEA. In the reading I was struck by parallels to Dune: galaxy-bending transport, falling in with a native of a foreign world, understanding and championing the underdog against a galactic behemoth hierarchy.

I’ve had this one in my TRB for too long, and relished the rich world-building. I think the big disappointment I had was a lack of the dialogue/culture uniqueness. Cruz and his associates speak Spanish, and have a deeply Hispanic culture. While I liked that there was some cultural inclusion, it was not terribly different from today’s speech or manner. And, that was my disappointment. Having been a long time fan of the richness of alien culture (think Enemy Mine, think Star Trek etc) having these CO2-breathing humanoids sit down to a table full of tamales was…anti-climactic. It’s like having a Klingon sit down to the traditional feast of hamburgers. That said, the story was truly compelling and the love story one to root for. There are few sexytimes, but what exist are tender and passionate. I really enjoyed this one and hope there might be more work in this world to enjoy.

Interested? You can find SONG OF THE NAVIGATOR on Goodreads, Samhain Publishing, Amazon, Barnes & Noble and AllRomance.  I received a review copy via NetGalley.

Astrid Amara lives in Bellingham, Washington with her husband, three dogs, three goats, and a horse. By day she is a civil servant. Her free time is devoted to her writing, working for animal rights and rescue organizations, and sleeping.

She is a returned Peace Corps Volunteer and a graduate of Western Washington University.

Her novel The Archer’s Heart was a finalist for the 2008 Lambda Literary Award for Best Sci-fi/Fantasy/Horror. Hell Cop won the XXXX Rainbow Award for best anthology.