Hi there! Today I’m sharing my review for BLOWING OFF STEAM, a contemporary M/M romance that features an awkward trainspotter and a reformed playboy. Joy Lynn Fielding has written a truly delicious romance that celebrates all the best in geekery and do-overs. 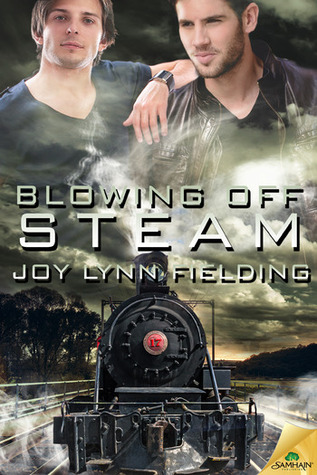 About the Book:
Two guys, a train, and lots of steam.

Sam Chancellor has been in love with the steam engine Old Bess since he was six years old. Well, maybe not literally, but even when he’s lost everything else in his life, he’s always had her. But now her place in his heart has been unexpectedly challenged. Her new driver, Ryan Saunders, is the embodiment of all Sam’s fantasies.

Ryan has written off Sam as just another geeky trainspotter—until the moment Ryan sees him without his usual shapeless hoodie, and realizes that for a nerd, Sam’s pretty built.

When Ryan overlooks Sam’s awkwardness long enough to suggest a hook-up, Sam seizes the opportunity—and Ryan—with both very eager hands. Finding common ground in their shared love of Bess, their time together is better than Sam ever dared dream.

But there’s a reason Ryan never talks about his past. And when Ryan’s job is threatened, Sam’s well-meaning intervention puts both Ryan and Bess in deadly danger.

Product Warnings: Contains train geekery, bed-hogging, a hero with no experience and another with plenty to spare, and a spider called Mabel.

My Review:
Sam is a small-town man, living alone in his late great-uncle’s home in Cardyle. He has always been awkward and not had many friends–growing up a scrawny gay orphan who loves trains did not engender many personal friendships, though he is very well-known in the local and online trainspotting community. Not long ago, Sam spotted something else of interest: Ryan Saunders, the new driver of Old Bess, the prized steam locomotive of Cardyle.

Ryan Saunders has been a flamboyant playboy most of his life. He’s run his wealthy father ragged, and is now under strict orders to not seek any contact or else his monthly allowance will be cut off. This isn’t ideal when he new boss insists Ryan speak to his father for a large endowment to Old Bess’s Trust–or else Ryan can just move on to another job.

Ryan is frustrated over his situation, and takes solace in picking up the geeky but earnest Sam one night after work. Sam is an exuberant, if completely inexperienced lover, and this has a peculiar effect on jaded Ryan. They begin to discuss Ryan’s trouble at work, and Sam is outraged. His attempt to fix the situation pulls up some really disastrous information, the kind that puts more than Ryan’s job security on the line. I really enjoyed the tension here–I didn’t know how or what form the attacks would come, but I was sure that Ryan, and perhaps Sam, was in life-threatening danger which really added a whole different dimension to the story. What I expected would be a wrongful termination suit, or perhaps a botched blackmail scheme, turned out some much more harrowing! I loved it.

I also loved the tenderness that developed between Ryan and Sam. It was entirely sweet, and funny, too. Poor Sam and his pet garden spider! Ryan certainly had no love for Mabel/Shelob. He did, however, have love for Sam, so I guess all was as it should be. As a Yankee, I swoon for British men, and the manner in which they treat themselves. From disparaging each others’ tea strength to the side-eyes they gave over train configuration, I adored every moment of Sam and Ryan together.

This book has a crazy-good amount of sexytimes, though not all of it is described in gritty detail. The scenes were often emotionally present, and that was charming, and sexy, too. As a mother of boys, I get the train fascination and I really enjoyed the trainy details. It was heartwarming to see such a stodgy experience, trainspotting and steam locomotives, brought into contemporary life. And, really, I can’t help loving when a geeky guy lands a sexy keeper. Both Ryan and Sam are essentially alone in the world, and they find such companionship with each other I was rooting for them all the way.

Interested? You can find BLOWING OFF STEAM on Goodreads, Samhain Publishing, Amazon, Barnes & Noble and AllRomance. I received a review copy of this book via NetGalley.

Joy Lynn Fielding lives in a small English market town, where she indulges her passions for vintage aircraft, horse-riding and gardening (though not all at the same time).

Joy has a tendency to wax lyrical about the fascinating facts she discovers during her research for books. Thankfully she has a very patient Labrador who has a gift for looking interested in what she’s saying while he waits for the food to arrive.