Hi there! Today I’m reviewing THE OTHER SIDE OF WINTER by GB Gordon. This is a dystopian M/M mystery romance that keeps the reader on edge. It is the sequel to SANTUARIO, which I really enjoyed–despite it being VERY light on the romance. WINTER has not only more romance, but more story–and readers of the series (myself included) are already clamoring for a third book. 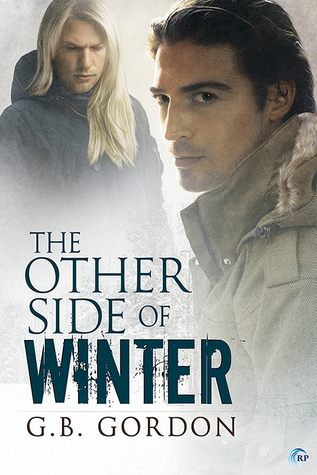 About the book:
Not all wounds are visible.

Skanian investigator Bengt fell in love with fellow policeman Alex Rukow in a week. But that was a year ago, and they’ve been apart ever since. Then Alex escapes the corrupt and destitute island nation of Santuario and comes to live with Bengt. Happy ever after . . .?

Alex’s lifelong dream of leaving Santuario has come true at last. But he finds himself adrift in a society he doesn’t understand. Worse, past nightmares come back to haunt him, and after so many years of suspicion and self-reliance, it’s harder than he imagined to trust someone else.

Bengt just wants Alex to share his comfortable life. But the more he tries to give, the more Alex pulls away. Their physical connection couldn’t be better, but Bengt can’t seem to get through to his difficult, taciturn lover outside the bedroom. Meanwhile, he has his own demons to confront—not to mention a serial killer on the loose.

Bengt and Alex must dig deep for the courage to face their pasts, but it may be too late to save their relationship or their lives.

My Review:
This is the second book in a series, and it is best to read them in order.

Alex is a Santuarian, and a refugee to Jarvegur where he reunites with Bengt, a Skanian cop. Alex and Bengt spent one tense week working on a murder investigation a year ago, where Alex finally acknowledged his attraction to Bengt on their last night together. In Skanian society (Bengt’s worlds) there is no stigma associated with same-sex couples, but in Santuario, the island of Alex’s birth and where he lived his first 30 years, being gay was forbidden and likely lethal.

In Jarvegor, however, Bengt is anxious to bring Alex into his life in every way possible. Neither Bengt nor Alex truly understands how to live as a couple, however. Alex had had a REALLY hard life, his mother and stepfather were murdered when he was young and he was repeatedly beaten by his biological dad. So, he grew up knowing he had to make his own way, take care of his own needs, and he is ill accustomed to anyone caring for him. He’s frustrated that assimilation into Skanian society takes so long, and he has no means to find a job without his “green card” being processed, so Bengt is providing for all his physical needs–real and assumed. Plus, one of Bengt’s acquaintances makes it clear that, if Alex ever tired of Bengt, he’d gratefully pay Alex’s way in exchange for his sexual services, leaving proud, smart Alex feeling like a prostitute.

Bengt, for his part, is overjoyed to have Alex in his life. He stops working long hours, anxious to come home to his man. They seem to build a rapport, but Bengt can feel that Alex is holding back. He knows he should tread lightly, but he can’t seem to–he’s head-over-heels.

Alex is admitted to the police training school, and must move out to the dorms, where he begins to make friends outside of Bengt’s sphere. Returning home on weekends is harder than Alex imagined–he feels like such a freeloader, and so ashamed, but he can’t reveal his vulnerability because with that comes all Alex’s other self-esteem issues. He still can’t imagine what beautiful, esteemed, successful, wealthy Bengt finds appealing in a destitute refugee, and there is some self sabotage, as well as general misunderstanding that leads to a break up.

Still, Alex’s training at the academy digs up a cold case that is similar to an active one which has Bengt stymied. Their meetings, to discuss leads and follow up, are difficult. Bengt wants to reconnect, and Alex is afraid to rely on Bengt. There is a lot of separation and soul-searching (on both parts) as the case unwinds. Alex hits rock bottom, and reaches out (FINALLY!) for the help he needs. He finds the purpose that has been missing from his life, and begins to feel worthy of love, and Bengt.

The writing here is really superb. The sense of disconnection of an immigrant, and a refugee, is deftly written. I think may would expect Alex to joyfully embrace his good turn in life, but that’s not always possible when life has been SO difficult. One can’t just jettison a lifetime of behaviors and experiences of scraping and bowing and barely surviving, it’s practically PTSD, and Alex needs (and gets) the professional help to survive in this new and shiny life.

I think the mystery was well drawn and the book had a lot more going on that a romance, though it was there. I really feel connected to Bengt and Alex after this book, and hope that the planned sequels come to pass.

Interested? You can find THE OTHER SIDE OF WINTER on Goodreads, Riptide Books, Amazon, Barnes & Noble. I received a review copy of this book via NetGalley. 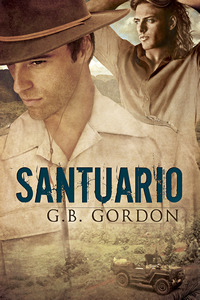 The first book in this series, SANTUARIO, provides the back story behind Bengt and Alex meeting a year before. Bengt traveled to the arid island of SANTUARIO to investigate a murder–only to find another dead body and a conspiracy no one wants solved. I liked it bunches, lots of great introspection and action, but there is, alas, very little romance. Alex’s home is hostile to same-sex couplings, and he is nearly stunned by Bengt being openly attracted only to men. It is quite a tight character study as well as a compelling mystery.

You can check out my complete review here.