Welcome to another pre-Halloween SPOOKTACULAR inspired read. This feature is a RURAL fantasy. Ha! Coined a new subgenre right ‘ere! It’s like an urban fantasy, but the setting is rural—so, yeah… 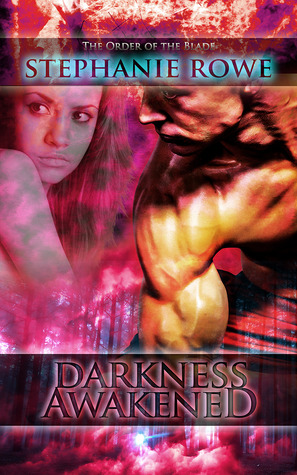 Anyhoo, Stephanie Rowe’s DARKNESS AWAKENED is not a vamp tale. It’s not an angel tale, either. It is a romantic adventure with paranormal elements, however, and that caught my eye.

Quinn Masters isn’t just a Calydon warrior—he’s a member of the Order of the Blade—an elite fighting unit charged with keeping the peace between Calydonians and hiding their existence from the human population. Order members are virtually immortal—Quinn is over 500 years old—but they are forbidden to take mates. See, for Order members, mating women is to invite madness. Never a good idea to have lunatic assassins on the loose, methinks. While on a training mission in the untamed Oregon forests, Quinn’s team of new recruits is slain by one of his own—Elijah, a trusted mentor and friend.

When he recovers from his injuries, Quinn discovers Grace Matthews waiting on his doorstep. Grace knows revealing her presence is tantamount to a death sentence—Illusionists like herself have been hunted to near extinction—but she needs Quinn’s help to rescue her sister Ava from a malevolent being—the same one who turned Elijah on his fellow Calydonians. Quinn doesn’t realize Grace’s Illusionist powers at first, but he certainly apprehends her feminine powers—the attraction between them has it’s own GPS signal for goodness sake!—so he’s anxious to send Grace on her merry way.

Of course, when Quinn’s home is attacked with them trapped inside, he and Grace become unlikely partners in order to escape. And, it turns out, Grace is able to track Ava’s Illusions so she has value in finding Elijah before he goes psycho yet again.

On the quest for Elijah and Ava, the attraction between Grace and Quinn blossoms.  So much so that the Order is ready to terminate Grace to save Quinn from mating madness. Good thing she can conjure Illusions to protect herself!

The plot is active and the voice is playful. It’s not too hot and spicy, but it’s clearly got strong romantic elements. I loved the banter between Quinn and Grace. This is the first in a series and we get a good look at several Order members upon which the continuing plot rests.

Even better, this fun read is FREE! [Except at B&N…?] So you can download at will. GOODREADS   AMAZON  BARNES & NOBLE

If you check this one out and like it, please let me know in the comments.

And, as always:  keep reading, my friends!