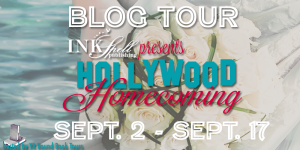 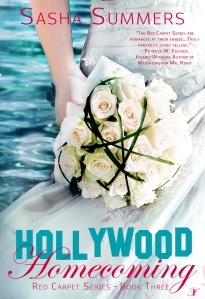 Why did that word rank above the rest? Helen loved her family and understood they wanted her to have the real love they’d all found. It’s just that she’d found her someone special and learned to live without him. She’d been too young for the quirky, idealistic doctor-off to save the world-to notice. And, really, if she had it her way, he’d never know how she’d felt. Now, he was one of her best friends, a pen pal, losing him would be too much.

Seeing him at their parents wedding, Helen realizes the horrible truth: she still loves Joseph… which wouldn’t be so bad if she wasn’t in the situation she was in.

But she was. And her secret will change everything. Will it destroy hope for a Hollywood happy ending too?

This well-paced contemporary romance is a prime read. I’m a sucker for series fiction and in this third Red Carpet novel we get the best of Josh and Clarie (Hollywood Ever After), as well as Gunner and Jenny (Hollywood Holiday) as their relationships intertwine with the budding romance between Josh’s sister, Helen, and Claire’s brother, Joe.

Helen’s admired Joe from afar for years. Now he’s moved to LA and wants to make Helen the center of his world, yet one medical scare after another forces her to push Joe away. Having his love is all she ever dreamed of, but she’s afraid he’s only sticking beside her out of convenience, or worse…honor.

And, having their family’s blessing is only adding to the pressure.

Helen’s a pure spirit and her love for family is truly all-encompassing. It’s impossible not to root for her, in spite of her predicament. Add in the love triangle–competition for her affection by Jenny’s co-star, Chris, only magnifies the tension.

Honestly, I wanted to be right there, holding Helen’s hand, telling her it was all going to be okay. And I’ll be a liar if I didn’t say I wanted to reach through the pages and hug her at that terrible moment she experienced at the airport, praying Joe would come back.

Summers weaves some delightful romance. Not too nitty-gritty-down-and-dirty, but readers will feel the heart in the scenes.

About this Fantastic Author: 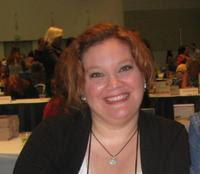 Sasha is part gypsy. Her passions have always been storytelling, history, romance, and travel. She writes both lyrical romantic fantasy AND steamy contemporary romance. Her first play was written for her Girl Scout troupe. She’s been writing ever since. She loves getting lost in the worlds and characters she creates; even if she frequently forgets to run the dishwasher or wash socks when she’s doing so. Luckily, her four brilliant children and hero-inspiring hubby are super understanding and supportive.

3 thoughts on “HOLLYWOOD HOMECOMING–Review and GIVEAWAY!”